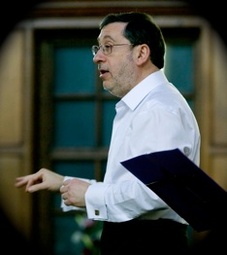 Recent projects can be found at the Tonic Choir website.

In October 2013 and then again in October 2015, at the historic Harrow School Speech Room, Philip conducted 300 singers in a major fund-raising event, part of the Voices for Hospices worldwide initiative. Over £8,000 was raised at each event.
More info plus photos and video from 2013.

In June 2014 Philip conducted 230 members of Tonic Choir in the Great Court of Blenheim Palace.
More info, photos and video

In July 2013, at the RAF Museum in Colindale, Philip conducted a choir consisting of over 200 members drawn from all 4 Tonic choirs, augmented by the Upbeat choir. Photo below.

In March 2012 Philip conducted a 150-strong choir made of representatives from 10 Harrow adult choirs and 3 from local schools. The performance was for Her Majesty Queen Elizabeth II during the Diamond Jubilee tour. Philip and Bryan Kesselman were then presented to The Queen. More details and photos.

Together with Musical Director Bryan Kesselman, Philip started the Tonic Choir in October 2009. Tonic is a totally open access choir with no auditions and no requirement for members to be able to read music. At the present time there are 4 Tonic choirs with about 250 active members.
www.tonicchoir.co.uk